Prejudice has preoccupied me greatly.

The dehumanizing grunt of South Africa’s apartheid regime continues to haunt me in my novel-writing.

Thankfully, that unkind chapter of government enforced segregation in Sub-Sahara Africa now been consigned to history.

But alas, it remains a cautionary tale.

All about us the fractured schism of tribalism, ideology, and prejudice abound.

Religious nihilism, demagoguery, nationalism and feigned hurts (amplified by political correctness and the internet) are the present day instruments of divisiveness.

All toxic and corrosive.

This made me wonder, Is anyone free of the pain of prejudice?

The Stranger Seated Across From Me

Her beauty was clear to everyone. But, and not holding up the haughty shield of genetically blessed superiority, she radiated instead both charm and warm humility.

She introduced herself as Petra; in time I got to know her as Petra Nemcová, the former Czech supermodel.

However, it was my internalized response that appalled me.

In an instant I had instinctively veered down the rabbit-hole of hackneyed stereotypes: blonde, beautiful–no, not dumb (I’m far more evolved than that!) but an equally unkind assumption; that she probably lacked substance.

Fortunately I checked myself, realizing my baseless and generalized prejudice against beauty.

And I’m so glad I did. Instead, I listened…

I enjoy learning about a person’s “legend”–it must be the natural curiosity of a writer to discover and understand an individual’s background in order to better appreciate their motivations.

She was born in Czechoslovakia, relatively close to Poland’s border. Petra was ten when communism was swept away by the Velvet Revolution. By 15 she was parading the catwalk of Milan. After herSports Illustrated swimsuit cover she was soon blessed as a Victoria Secrets angel. That was when she met fashion photographer, Simon Atlee, and they fell in love.

Was she herself prejudiced against beauty was the question I should have asked, instead we spoke about Prague and Africa.

It was the day after Christmas 2004, when a gigantic wall of water swamped their beautiful holiday resort in Thailand. Her last sighting ever of her love, Simon, was glimpsing him clinging to a bungalow roof.  Pounded by waves as she was swept out to sea, her pelvis pulverized, Petra clung to a tree for eight hours in absolute agony, before finally being rescued.

Along with more than 250,000 other people in Southeast Asia, Simon Atlee lost his life.

Scarred and broken, physically and figuratively, Petra began to rehabilitate herself.

[Note: Every Boxing Day (December 26th) is the anniversary of this tragic natural cataclysm.]

It’s the screams of children, as she clung to that tree, that continued to haunt Petra. She needed to do something substantive, so as to honor Simon’s life and fulfill some useful purpose after the wreckage.

For those gone there was nothing else that could be done, but for the countless lives displaced by the ghastly tragedy there was much-needed by those who’d so terribly suffered–especially all the children. With support and succor from others, Petra launched the Happy Hearts Fund (HHF). A wonderful program to keep up and build support for communities after the First Responders and aid organizations had moved on to the next crisis.

“Unlike malaria or polio, we can’t work towards a cure for natural disasters or prevent them from ever happening — but we can restore hope by helping communities get back on their own feet through rebuilding in safe and sustainable ways and creating opportunities for a better future. And that’s exactly what the Happy Hearts Fund strives to do.” Petra Nemcova, Founder, Happy Hearts Fund

My rush-to-judgement had long faded. Clearly, this woman was anything but shallow. In fact, she was positively inspiring.

But I needed to understand the underlying cause for knee-jerk prejudice against beauty.

Why are we prejudiced against beauty? Here are 6 clues:

#1 Resentment. The presumption that everything is far too easy for those blessed with beauty. That access and opportunity present themselves with no more effort than a bat of an eyelid. This has been deemed an unfair advantage by the rest of us mere mortals saddled with an average appearance.

#2 Kardashian Effect. In our 21st century, the trivial is substantially rewarded. Vacant, vulgar, but beautiful celebrity has become the holy grail of success. We enjoy reflecting in the afterglow of these plastic “stars”–but we certainly don’t respect them.

#3 Hollywood Mythology. The beauty versus intellect narrative was perpetuated by the motion picture studios. Marilyn Monroe and her sister’s of the silver screen embraced Betty Booppersonas, and in the process perpetuated the myth of the “Dumb Blonde”.

#4 Photoshop Fakes. Between Photoshop and plastic surgery there’s a visceral sense that modern beauty is no longer genuine. Hence, if a woman’s appearance is judged to be contrived, faked, then the assumption is that her persona suffers a similar fate.

#5 Overcompensation. Not wishing to overwhelm based on her physical beauty alone, some woman may “sabotage” their intellectual brawn (or, dumb themselves down) in an instinctive effort to be better accepted by peers. This leaves a false impression.

#6 Rejection. This is probably nearest to the truth. Who among us hasn’t had the yearning for a beautiful companion? Especially during one’s formative years; such as, that unattainable soul-throbbing crush seen across the schoolyard. Invariably it remains unrequited. Either due to lack of courage (never asking her out!), or worse, cold rejection. Rejection results in resentment, which in turn morphs into a growing pejorative opinion of the once revered “object of one’s desire.”

I’m sure you have other suggestions… 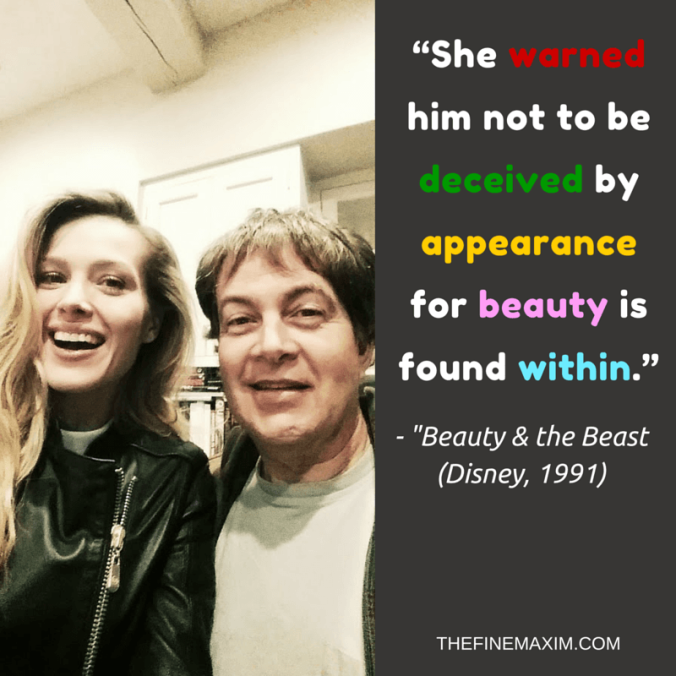 Ms. Petra Nemcová has taught me never to make hasty assumptions aboutanyone. As such she graciously volunteered to take this “Beauty & the Beast” selfie with me:

And, as an author I have now garnered deeper insights into the complex facets of an individual’s life, and the true nature of a substantive life (whether pretty or otherwise). All lives deserve to be explored properly. A “rush to judgement” based solely on a pretty facade makes us sosuperficial; the very attribute we glibly label those lovelier than us. In truth, in the process of living a full life–warts and all, we have all developed into compelling characters.

If you have any stories of a similar nature to share; a hasty dismissal of someone beautiful (or handsome), only later to be pleasantly surprised. Please let us know in the comment section below.

Author Mark Fine was a record label chief for PolyGram. Variety magazine named him “Music Executive with 20/20 Vision”—good thing too as Fine is tone-deaf. His failed efforts to compose a song resulted in the critically acclaimed novel, “The Zebra Affaire”. As research for his life story Fine immigrated to America from South Africa, in doing so he championed causes such as freedom of speech, wildlife conservation, breast cancer awareness, intolerance, and Indie Authors. He’d be delighted to hear from you at FineBooks.co or via Twitter @MarkFine_author.

This site uses Akismet to reduce spam. Learn how your comment data is processed.